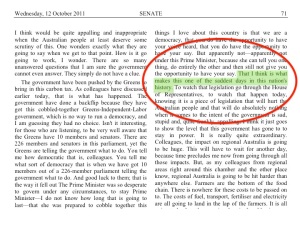 Amidst all the bullshit flying in Canberra yesterday, National Party Senator Fiona Nash described the passing of the Carbon Tax legislation as (quoting from Hansard) “one of the saddest days in this nation’s history”.

My friend and sometime collaborator Mike Stuchbery posted a great video address to Senator Nash on his blog, compellingly pointing out that there are dozens, perhaps hundreds of far sadder days in Australian history, the results of violence, disasters, plagues and pestilence.

But even if we exclude wars, despicable crimes, the acts of madmen and natural disasters and just look at politics and parliaments, it doesn’t take long to generate a list of numerous sadder days in Australian political and legislative history than the passing of the Carbon Tax legislation. Here are just a few…

Like Mike Stuchbery, “I could go on”. And like Mike Stuchbery, the Ham Historian calls for Senator Nash and others to have some perspective, acquaint themselves with some actual Australian history and (to paraphrase Mike) not make our political – or historical -conversations any dumber.

3 thoughts on “Sad days in Australian history: Some perspective, please!”